The cancer-causing chemical Benzene was found in many different sunscreens – that was the headline that made my DMs explode when I was on a supposedly chilled family hiking vacation in Bavaria.
A trip where I, obviously, packed a ton of sunscreens to slather myself and the kids in every single day.

So did I immediately throw those bottles away? Of course not.

Did I still apply sunscreen like I used to? Of course I did!

Does that mean I don’t think it is an issue? No, it is actually a big issue – but maybe a slightly different one than you were led to believe.

Who is Valisure and what did they find?

Valisure is an independent lab based in Connecticut that does independent studies to, and I quote, “… independently check the chemical composition of medication before it reaches consumers.”

They also offer different services around Drug Product Certification and the likes. To put in context here, in the US, where all that took place, sunscreens are considered Over-the-counter drugs and underlie certain regulations.

Studies like this are very important and of great value in keeping consumers safe. In this case, Valisure actually tested hand sanitizers first – they again are over the counter drugs – and, as reported in March 2021, found Benzene in high levels among 17% of the tested samples. Based on these findings they decided to expand their testing to other products and looked at sunscreens and after-sun-products next.

They tested 294 batches of sunproducts (sunscreens and aftersun) from 69 companies and found that again 78 batches, which is roughly 27%, contained Benzene.
So – why is this an issue?

What is Benzene and why is it dangerous to the human body?

Benzene is an organic chemical compound that contains a ring made up of six carbon atoms and a hydrogen atom attached to each one of them, which is why it is called a hydrocarbon. It is highly flammable and has a sweet smell that you most likely could identify as it is what petrol stations smell like.

Nowadays it is mostly used as a precursor in the manufacturing of more complex chemicals often used in medication, but back in the beginning of the 20th century it was used as after-shave due to its pleasant smell or even to decaffeinate coffee. As it is often the case, it was only with time that we learned about its toxicity for the human body, which is why now you won’t find it in coffee, aftershave or other personal care products on purpose.

When Benzene enters the body, which can happen through ingestion, inhalation or absorption via the skin, it undergoes metabolization via the liver, mainly through oxidation with several different conversion steps. Fun fact, one of these conversion steps is Hydroquinone (which I have a blogpost on here should you be interested).
I won’t go through them though, because what ultimately matters is that Benzene and some of its products are linked to cancer, especially different forms of leukemia and bone marrow failure – it is a known human carcinogen.

Is there a safe level for Benzene and how are you already exposed to it?

This is where things get complicated: There is no safe level that can be used in personal care products if something is a known human carcinogen. That is different from substances that might be toxic when reaching a certain threshold – these substances can be used at certain levels in your products.

But if there is no safe level of Benzene, why are there regulations in place on how many parts per million (ppm) you can be exposed to during your work week or when drinking water?
That is because Benzene is both man-made and naturally occuring – it is produced in forest fires, during volcanic eruptions, but also where fuel is handled, in car fumes, general city pollution and… in the smoke you in- and exhale when smoking.
While it would be amazing to have zero Benzene exposure in your everyday life, that is simply not possible unless you are a hermit in a hut far away on a mountain top.

A non-smoking hermit on a forest free mountain that is also not a volcano.

Each and every one of us is exposed to certain levels of Benzene, some people more than others, and this is where workplace regulations come in. We need people working in a gas station, but as they are more at risk spending a whole day in these fumes rather than quickly stopping by to fuel up the car, regulations were made to assure that their exposure is as low as possible and a cut-off has been set in place that shows when all the necessary measures are taken to protect worker safety.
As I assume most of you are not working at a gas station, your daily levels of exposure are lower, but will vary depending on where you live and if you or your household smokes – it should be as low as possible, but it will never be zero.

Living is some dangerous business.

Does that mean we should not care about the Benzene found in sunscreens?

It is a huge issue, because as I said: The exposure should be as low as possible, and covering quite a large amount of skin with a product containing Benzene – and reapplying! – will increase the exposure. By how much is still unclear, as we all know that different forms of exposure – inhalation, ingestion, absorption – create different levels of the substance in the bloodstream. Skin is a barrier after all.

I am not a toxicologist though, so I can not tell you which one is the worst in this specific case, I would just suggest minimizing all of them. Don’t do heavy exercise alongside a busy road, don’t share your home with a smoker, don’t apply sunscreen that contains Benzene.

But also notice: Not everyone exposed to Benzene will 100% develop cancer. It is a numbers game, where the more you’re exposed, the higher the likelihood. But just as there are 100 year old perfectly healthy heavy smokers, not everyone using a Benzene aftershave did develop leukemia.

Is this a sunscreen problem? And are chemical filters more risky than others?

Well, I said in the beginning that what sparked this investigation was Benzene found in hand sanitizers, so quite obviously it is NOT a sunscreen problem. What the headlines often forget to mention is that from the 78 batches tested positive for Benzene, not all were sunscreens. Some of them were Aftersun products containing no sunscreen filters at all.

Simultaneously from the sunscreens tested positive some used chemical filters, but others used mineral filters, so again this does not make a difference (I talk more about the different filters here).
In fact Valisure tested the chemical filters used like Avobenzone specifically to see if they may be degraded into Benzene and found that not to happen, coming to the conclusion that it is indeed a contamination problem, not a formulation issue.

Benzene is never added intentionally to any personal care product, it will never appear on the ingredient list and it is not a sunscreen issue – it is a manufacturing issue that needs to be investigated, which is what Valisure asks the FDA to do.

What is the best way to proceed right now?

First of all: Do NOT stop wearing sunscreen.

Unprotected sun exposure is also carcinogenic, and as I just pointed out, it is not a sunscreen problem. And while we are at it, don’t stop using hand sanitizer either, we are still in a pandemic.
Do go to the list Valisure provided – here is the link to the pdf – and check if the sunscreen you have at home is affected. And don’t just look at the brand name, these were tasted by batch, so you need to check the barcode on the package, it is called UTC code and is specific to the product, then the LOT number, which is specific to the batch of the product and THEN the expiration date to really make sure yours is the one they found Benzene in.

There is also another list containing products that were tested, but did not contain Benzene, so you can double check your product, again with all the numbers mentioned, on there.

But what if your sunscreen is not on either list? That is what is true for me, as they tested US sunscreens that mostly aren’t even available to me here in Germany. Well, in that case you can’t say for sure whether or not it contains Benzene, as no one tested it. Just like you can’t be sure that your moisturizer, your toothpaste or your glass of coke does not contain Benzene – it is not supposed to, but contamination can happen everywhere.
My advice would be: Don’t use your sunscreen if it was tested positive for Benzene, but do use your other stuff and, most importantly, don’t freak out.

There is a saying in Germany that I find hilarious: Living is a sexually transmitted disease that we all are going to die from.

Which for me puts things in perspective: We are all going to die eventually – don’t waste your time living in constant fear. Be careful, but not fearful. 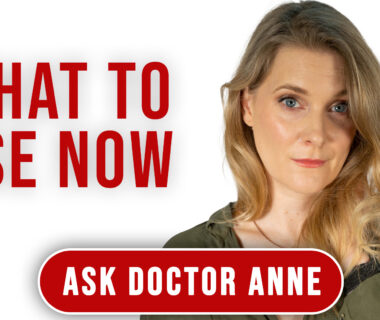 Which skincare and ingredients are safe to use during pregnancy? | Ask Doctor Anne 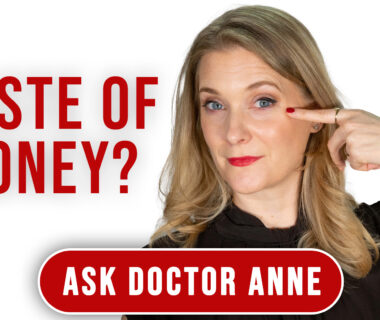 Is using an eye cream really necessary? Or are they just a waste of money? | Ask Doctor Anne